So,
This is the most significant non-conflict mechanic in my new fantasy game Legends of Lanasia.
Destiny Points are designed to be the players' reward for good play.
This is defined as:
- Engaging in the GM's contributions
- Entertaining the group
- Contributing to the story being told at the table.
I have very specific ideas of what these look like, but for the purposes of brevity, I will keep it short and sweet.
So, the Destiny Points do not have a direct mechanical effect (you cannot spend them to alter a die roll or re-roll or anything like that).
Their only use is for the player to ask for their reward in the form of story currency. The list of uses is as follows:
1) Introduce an event to the story
2) Introduce a plot twist
3) Introduce a sub-plot
4) Introduce a new NPC
5) Introduce a relationship with an existing NPC
6) Introduce a sub-quest
7) Introduce am item to the scene (this might be a magic sword, pile of gold or something more important to the PC like their mother's locket).

It is important to understand that once the Destiny Point is spent, something in the game will change. And the player spending it should determine what that change is.
I am going to let players besides the GM and the player spending the Destiny Point to veto, but only on two conditions:
1) Genre conventions (like, maybe they can find a golem instead of a robot)
2) Disruptive (the sub-quest takes them halfway across the world when there is a lot happening locally already)
Once that is out of the way, there are two pairs of questions that need to be answered:
1) "How big is the change?" or "How much effort does the character still need to exert?"
So, the player has to be able to answer one of these questions, Then the other is answered automatically based on their answer. So, if the change they want is earth shattering, then the player will have to spend a monumental amount of effort.
2) "What is the Mechanical effect?" or "How much effort has the character exerted?"
Again, the player answers one and the other is answered automatically. If the character already put a lot of effort to achieve this change, then the mechanical impact should be big as well..

So, to break this down to a step-by-step procedure, this is how it goes:
1) What type of change?
2) What is the change?
3) Exerted/Size? (questions 1 above)
4) Effort/Mechanics (questions 2 above)
5) Agreement (the players all think it is fun/fair and it is incorporated inot the story being told at the table)

Below is diagram of how a conflict will go down in LoL. 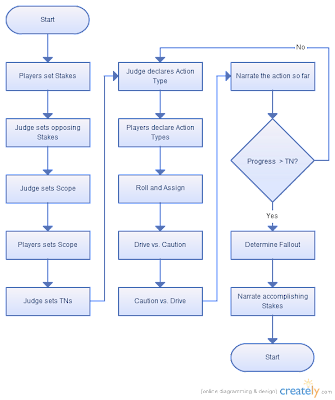 Email ThisBlogThis!Share to TwitterShare to FacebookShare to Pinterest
Steampunk Crescendo is at the Editors, soon to be released.
Now, I am circling back to Legends of Lanasia!
Posted by Dave M at 12/12/2010 07:36:00 PM No comments:

Dave M
The first RPG Dave ever played was one of his own design (and the first session ended when an unstoppable force met an immovable object). Since then he has designed Steampunk Crescendo, City in Darkness, InGendarme, Moral Fiber Optic, Legends of Lanasia, Heart of Glass and others. Dave strives to make compelling settings that are inspiring even without the rules and rules that are fun to play all by themselves.